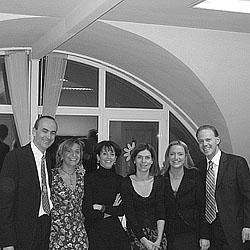 Anatomy: dissection, knowledge of the construction and composition of the body

Anesthesia: desensitization (by narcosis, administration of an anesthetic or analgesic).
See the pdf information brochure about anesthesia.

Artery:  A vessel that carries blood high in oxygen content away from the heart to the farthest reaches of the body.

Artificial socket: acetabular component of the hip replacement that is clamped in the pelvis

Aseptic necrosis or osteonecrosis: death and cavitation of bone tissue without infection

Bacteria: single-cell microorganism of the order of 0.1-10μm

Biocompatible: no rejection reactions by the body

Bioinert: no rejection reactions by the body

Blood transfusion: giving a quantity of red blood cells that ensure the transport of oxygen in the body

Brackets: The skin is closed with hooks that can be easily removed 14d after the procedure

Cartilage: smooth, shimmering layer that covers and protects the ends of long bones at the joints

CDH: Congenital Dysplasia of the Hip

Cobalt alloys: In the 1930s these alloys were introduced for the manufacturing of orthopedic implants because they were more resistant to corrosion than the stainless steels at that time.

Congenital hip dysplasia: congenital malformation of the hip joint with a tendency to develop poorly

Cortisone: a natural substance that normally occurs in the body and is produced by the adrenal gland; also exists as a medicine and works anti-inflammatory

Coxarthritis: wear of the hip joint

Drain of Redon: flexible plastic hose that is left behind in an operating area, with a vacuum bottle at the other end.

ECG: Electrocardiogram. Registration of the electric ativity of the heart

Epidural space: the space between the dura mater and the wall of the spinal canal

Fungus: organism with cells 10X as large as bacteria

Ilium: the broad, dorsal, upper, and largest of the three principal bones composing either half of the pelvis.

Inflammation: Tissue reaction to a harmful stimulus, this is classically characterized by signs: redness, swelling, heat, pain and impaired function. Everyone who undergoes surgery will to a greater or lesser extent do some kind of inflammatory reaction as a result of the operation itself. This is completely normal and is treated with ice application and adjusted medication that you will receive the first days after the operation to minimize the nuisance of the inflammation.

Infusion: intravenous administration of fluid and / or medication, without pressure other than gravity

Ischium: forms the lower and back part of the hip bone

Joint capsule: sheath of the joint

Labrum: the ring of cartilage covering the rim of the hip socket

Leg cement: The most frequent form is PMMA bone cement. PMMA stands for Polymethyl Methacrylate. This is a polymer with the same basic composition as Plexiglas. PMMA was discovered as biocompatible material when the plexiglass, which was used for windscreens of aircraft, came into the eyes of pilots and did not cause an immune response of the body. The first applications were in dentistry. In the 1960s it was introduced to fix orthopedic implants in the bone. It was mainly the orthopedic surgeon Sir John Charnley who announced the use of cement worldwide.

LMWH : Low Molecular Weight Heparine, injections that you get for 6 weeks in the subcutaneous fat fold to prevent phlebitis after a THP

Lung embolism: sticking of an embolus (blood clot) in a blood vessel of the lungs

Luxation : dislocation; during hip dislocation, the hip head comes out of the hip socket

Nausea : the feeling that you are going to vomit

NSAID : Non Steroïdal Anti Inflammatory Drug, the medicine works anti-inflammatory but does not belong to the cortisone family

Orthopedics: the specialism that focuses on the treatment of abnormalities, diseases and traumatic damage to the musculoskeletal system

Osteofyt: small, irregular bone growth in the vicinity of a joint plane secondary to osteoarthritis

PAO : Para-articulare ossification of bone formation in the vicinity of a joint

Peridurale anesthesia: desensitisation by injection of an analgesic in the epidural space.

Prothesis stem: femoral component of the hip prosthesis that is clamped in the thigh bone

Recovery: awakening room where you are observed a few hours after the surgery before returning to your room

Rheumatism: an inflammatory process of muscles and joints

RX Thorax: radiography of the lungs

Sacrum: A triangular bone in the lower back formed from fused vertebrae and situated between the two hip bones of the pelvis.

Snapping hip: hip joint that gives a crackling sound when a tendon glides over a bone end

Sport hip: Is often used as a synonym for resurfacing hip replacement. The term sport hip, however, is not well chosen because one can also exercise with a classic hip replacement.

Stainless steel: The term steel refers to a family of alloys consisting of iron and carbon. By, among other things, varying the carbon content, steels with many different properties can be manufactured. When Chromium is associated with levels higher than 12%, it will disappear typically rusting and stainless steel will be obtained. Again there are different types of stainless steel. For surgical implants, the 316L alloy is mainly used, which also contains Nikel and Molybdenum in addition to Chromium. The L means that the carbon content is kept low for better resistance to corrosion.

Synovium: synovial membrane; a membrane that coats the joint capsule and secretes synovia

TED socks : Trombo Embolism Deterrent socks, elastic socks worn by patients after an operation to prevent thromobis or an embolism.

Titanium alloys: An alloy that has been used since the sixties for the production of prosthetic material. This material was originally introduced because it is extremely resistant to corrosion and because it does not contain Cobalt, Chromium or Nikel. In other words, it is extremely biocompatible. Later on, another advantage became clear: the stiffness of titanium alloys is half of Cr / Co alloys or stainless steel and thus comes closer to the stiffness of bone. This also prevents the phenomenon of stress-shielding.

Trochanter: leg extension of the femur

Ultrahigh Molecular Weight PolyEthylene: UHMWPE is a thermoplastic polymer that is bioinertic in large form. The medical application of PE is only a small fraction of the much larger industrial application. UHMWPE was commercially introduced in 1955 and used for the first time in hip prostheses in 1963 and for knee prostheses in early 1970.

Vein: carrying in oxygen-depleted blood towards the heart