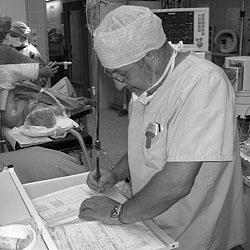 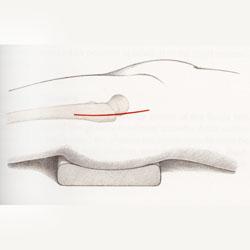 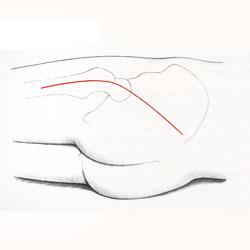 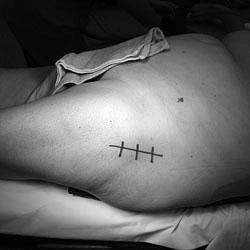 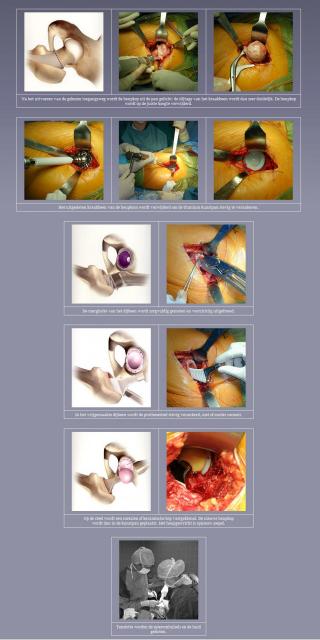 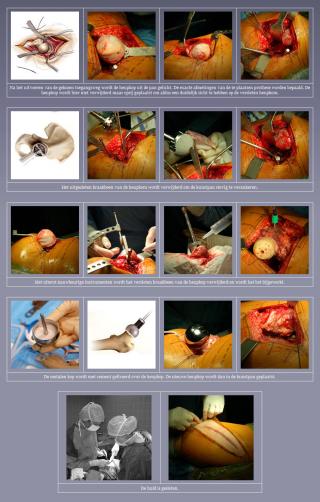 A local anesthetic through a puncture in the back is favoured. This so-called "peridural" anesthesia is supplemented with a slight general anesthetic during the operation itself, so that the patient does not have to consciously experience the operation..

Indeed, various anterior access path have been described, each with their advantages and disadvantages. For the majority of these access paths, the patient is installed on the back of the operating table.

Also here, th various access routes have been described and the patient is installed sideways on the operating table.

The use of one or the other access path depends entirely on the surgeon's preference.

We prefer the anterior access path where the patient is installed in the supine position on the operating table. Thus a total hip prosthesis can easily be implanted with a skin incision between 8 and 12 cm. Maintaining clear orientation points on the one hand for the perfect positioning of the pan and on the other hand for a good control of the leg length are our main reasons for choosing this access path.

We prefer the posterior access path where the patient is installed sideways on the operating table. This technique was optimized in 2007 after experience with fellow doctor David Young in Australia.

Advantages of this technique are that less muscle tissue has to be released, patients can lie more easily on the operated side or sleep because the incision is more to the rear and in most cases the skin incision is also smaller than the standard used access path.

A lot has been published in medical literature in recent years, but also on the internet and in the media in general about small, so-called 'mini' incisions and minimally invasive surgery.

Firstly, it must be said that the length of the skin incision in itself has no influence on the speed of recovery after the procedure. A small incision has only an aesthetic advantage. The most important thing is what happens inside, in other words the damage caused to tendons and muscles under the skin determines the speed of recovery; therefore the term minimally invasive surgery is better.

Minimally invasive surgery is perfectly possible along front and back. However, it depends on many factors whether or not one will be able to place a hip prosthesis through a small skin incision. If during the procedure it is noticed that the various components are difficult to place through a small incision, there will be no doubt that the skin incision will be increased in order to realize a perfect placement of the components. Only a perfect placement of the prosthesis can guarantee an optimal life of the prosthesis.

After performing the chosen access road, the hip head is lifted out of the pan: the wear of the cartilage becomes very clear. The hip head is removed at the correct height.

The worn out cartilage of the hip bowl is removed to firmly anchor the titanium plastic pan.

The femoral cavity of the femur is carefully measured and carefully milled out. The prosthesis stem is firmly anchored in the released femur, with or without cement.

A metal or ceramic head is clamped on the handle. The new hip head is then placed in the plastic pan. The hip joint is again flexible.

Finally, the muscle sheaths and the skin are closed.

After performing the chosen access road, the hip head is lifted out of the pan. The hip head is not removed here but placed aside so as to have a clear view of the worn hip bowl.

The worn out cartilage of the hip bowl is removed to firmly anchor the plastic pan.

The worn cartilage of the femoral head is removed and the bone is updated. The metal head is fixed with cement over the hip head.

The new hip head is then placed in the plastic pan. The hip joint is again flexible.

Finally, the muscle sheaths and the skin are closed.

Placing a hip replacement takes 35 to 50 minutes. The blood loss is minimal and a blood transfusion is therefore rarely necessary. The patient is immediately awakened to the recovery room with the leg in a gutter to ensure an ideal position of the operated leg. Thanks to an adapted schedule of pain medication, the majority of patients experience little to no pain.